So, sales have not been good at all, almost completely because of the poor advertising of the fair, bringing in next to no tourists to the site. There are several things I could complain about, but won’t right now. It was not only us who suffered these past five days, but just about every other organization that shelled out the high rates for the booths. I think most of us will be lucky to break even and many booths have already closed up.

More on that later. For now, a picture that is an amazing ‘fail’. All around Cambodia (and must of Asia) personal vanity is looked upon favourably. All youngsters who can afford it, get dressed up in their funkiest, coolest gear, get all made up, go wild with their hair and subject themselves to hours in front of a camera at the local photo studio to get hot, funky photos of themselves. They pose. They posture. They make love to the camera. The poses are stereotypical. The make-up is extreme. The hair is just fabulous.

After the photo shoot, the best pictures are chosen and photo-shopped for hours. Bodies are cut out and backdrops range from fashion week at Milan to Hello Kitty parlour scenes. To make the photos even cooler, sometimes random phrases in English are added. Unfortunately, no one checks that these make any sense or contain any obscenities. It doesn’t matter. Cool doesn’t need spell-grammar check.

Samples of the photos are usually hung around the photo shop to entice new customers. The results are often amusing for those in the know of the English language…. have a look: 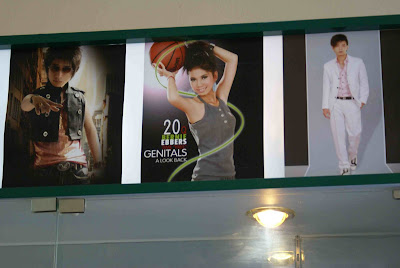 After discussing this with Yeng, it seems that spell check might be to blame. He thinks they might have been going for ‘gentle’ and ended up with ‘genitals’ instead…

SHIPPING NOTICE: Due to Covid-19, we are processing orders as best as we can, but please be patient with us. Dismiss