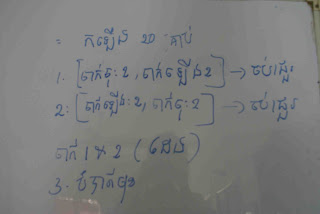 Its been a long, tiring, but fun week. First of all, I present to you what might possibly be the very first ever knitting pattern in Khmer. I can not confirm that this is indeed the first (and perhaps that is rather unlikely) pattern to ever be written in the Khmer language. It is entirely possible that before the Khmer Rouge period there were books or booklets of patterns available at the markets. The history of knitting and crocheting in Cambodia is murky, but who knows what we’ll discover on this journey. Still, none of the women working with me now have ever followed a pattern, let alone seen one.

A big challenge has been teaching them how to read and follow a pattern. An even bigger challenge has been figuring out how to write one! The knitters don’t have language for all the terms that come up in knitting (things like garter stitch and moss stitch have no names, and terms for things like KFB, sl1k1psso are unknown). A knit stitch is referred to as stitch up and a purl, as a stitch down. Pretty much everything else we’ve been making up as we go along. When I say we, I don’t actually mean me, except in the role of facilitator, encouraging the women to develop language that they can work with. For example, I explained that seed stitch is called so because it resembles seeds (or moss, if you call it that). In Polish is it referred to as rice stitch, again because of the resemblance. In the end, the knitters decided to refer to it using a Khmer word to describe a certain rice seed!

This is all very challenging, yes, but even more than that, its exciting! Exciting to be a small part in the process of creating a vernacular that can later be shared and passed on. Its possible that in the next few months, as we meet more knitters and hear more stories about how people learned to knit, that we’ll come across some old pattern books or rediscover the lost language of Khmer knitting. If we do, we’ll revert to using what is already there. Until then, we’ll keep being creative and playing with stitches and words.

Dear Customers! We are no longer fulfilling orders on this site! Check in with Beebee+Bongo instead...we'll be launching soon! Dismiss